Come to me Dark Warriors battle awaits us... 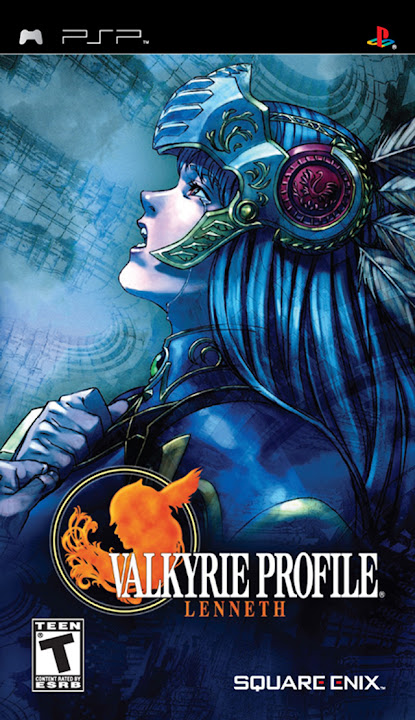 
"To my side, my noble Einherjar!" So goes the call of the Valkyrie, as she brings forth the souls of the dead to aid her in her battles against evil. The forces of evil are mounting an assault on Valhalla so Odin calls upon his Valkyrie, Lenneth to search the world and find souls who are worthy to aid in the battle of the gods. The original Valkyrie Profile was released at the tail end of the original PlayStation's life, and has been considered by many to be one of the best RPGs, if not THE best RPG on the original PlayStation. Because it was released at the end of the the PlayStation's life, it had a low print run and can be pretty hard to find, or perhaps it's better stated that it is rather expensive to acquire. As of this writing, new copies on Amazon are listed at over $200 and used are around $85. For those who missed the game the first time around, Square-Enix was kind enough to port the game over to the PSP.

Gameplay
Valkyrie Profile is one of the more unique RPGs I've ever played. The objective of the game is to recruit souls of those who have passed on to fight for Odin. The game is broken into several chapters with specific recruiting objectives for each chapter. Objectives may be the need for a strong fighter, a leader, or someone good at negotiating. Filling the objectives gains you favor with Odin and you are then rewarded with unique items and Materialize Points (the game's currency).

Each chapter is broken into several periods. At the start of each chapter, you find the Valkyrie hovering over Midgard. From there, she may visit a city, explore a dungeon, or enter Spirit Concentration (the method by which the Valkyrie finds souls and dungeons). However, performing the actions will cost a certain amount of periods, so you must choose what you want to do carefully as once you have used them all up, you will enter the Sacred Phase, where your performance is rated by Odin.

Each time you find a soul to recruit, you must visit that location, where you are treated to a cutscene that will show the how the souls you are recruiting died. Once you have the souls they become the Valkyrie's Einherjar, and will aid her in battle. After you recruit your Einherjar, you must prepare them for battle so they will be worthy to fight in Odin's army. To do this, you will visit various locations in the world ridding it of the evil forces that have taken up residence in Midgard. Fighting through the dungeons will provide your Einherjar with the necessary experience to allow them to be transferred to Asgard and aid the coming battle. This was one of my favorite things in game, and sounds a bit morbid, but I loved watching the vignettes that introduced new characters. Through the course of the game, you begin to see that some of those who had previously been recruited impacted other events and recruits.

When exploring towns and dungeons, Valkyrie Profile switches into 2D view. Exploring dungeons in many ways feels like more of a platforming game than an RPG. As you move through the dungeons, you will need to jump, slide, climb, etc. to achieve your objectives. All the enemies that appear on screen and once you touch them, you will enter into Battle mode. If the enemy touches you, they will get the first turn, but if you attack the enemy (by slashing with your sword) before they touch you, then you get the first turn in battle. 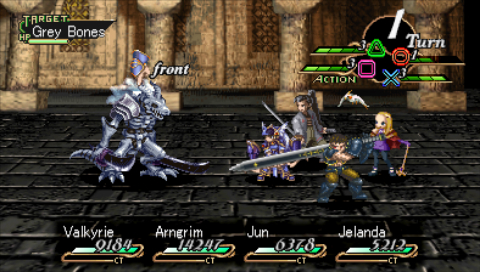 You can field up to 4 characters at any given time, but as you must always have the Valkyrie in your party, you are really only choosing three different characters. Your party will form a diamond and each character is tied to one of the buttons on your controller based on the formation. So the front of diamond is the Square, the top and bottom are the Triangle and X buttons, and the Circle button is tied to the character in the back of the formation. To attack, you simply press the character's corresponding button. As you attack, your combo meter will build up and, if it reaches 100, the characters who have participated in the combo will have the chance to perform a special attack that will unleash massive damage. During each turn, you characters can hit up to 3 times each depending on the weapon equipped, and more hits means easier combos. So you may find yourself equipping a weapon that does less damage with more hits, over the heavy damage weapon with only 1 hit.

It took me a sizable chunk of the game to really get a good feel for the combat, and even then, there's some brutal enemies that you face that it seems you beat through sheer luck. Combat is not for the faint of heart. It doesn't help that in many dungeons that save points aren't very frequent.

Graphics
As this was a port of a PS1 game, the graphics are essentially of PS1 quality. Obviously, the game was enhanced to run in widescreen for the PSP. The original game had several animated cutscenes to help move certain parts of the story forward, those were replaced with the trademark Square CG cutscenes. It's arguable which is better; the CG scenes look very good, but to a certain extent, the original has a bit more personality, at least in my opinion.

Here's the opening movie for the original:


And here's the one from the PSP version:


Even though I feel that the original animated version has more personality, both styles are very well done and I don't think you would really be missing much with the PSP version. In fact I'm sure that there are quite a few people who prefer the CG scenes.

Sound
There are two major elements from a sound perspective that need to be addressed in this game: the voice acting and the music. The other sound effects were well done so I won't dwell on that.

As for the voice acting, it's really kind of hit and miss. There's some really great work, and there's some not so great work. But, if you're like me, and have played a few JRPGs, then you may have come to love the awkward-sounding characters that always seem to show up in games such as these. It's got it's far share of high-pitched females and soft-spoken males, so if the traditional JRPG voice acting is a show-stopper for you, well, be forewarned. That being said, I thought that the Valkyrie's voice was perfect, and you'll be hearing more of her than anyone else.

The music, for the most part, is well done. Motoi Sakuraba is the composer, and if you've played any Tales games, you can definitely hear his style in Valkyrie Profile. There are a few tracks that I felt were a bit directionless, and in fact some of my least favorite tracks were the final boss battles (which is not a good way to end a game, those should be memorable), as they were a bit too frenetic and didn't have enough theme. However, there are plenty of other great tracks that I fell in love with, such as "Behave Irrationally" (played when Lenneth is 'recruiting' someone) and pretty much all of the dungeon music. Overall, I'd give the music a thumbs up.

Value
My play through on normal took me around 50 hours to complete. Given that there are at least three endings to the game, that alone will give you some replay value if you want to see them all. In addition to the different endings, depending on what difficulty you selected (Easy, Normal, Hard) you will have different dungeons that you can visit. Some dungeons are only available in Easy, others only in Hard. Once you have beaten the game, the bonus dungeon, the Sepharic Gate will open. However to take full advantage of that, you need to have collected the Eight Flame jewels, which can only be done during a play through of the game on Hard. In short, there's a lot to do here.

The Bottom Line
This is a rough one to wrap up as I don't think that this game is for everyone. It's a great game, combat is fun, but challenging. The characters really make this game. The intertwining stories of the inhabitants of Midgard really drew me into the game. So, if you really like JRPGs, and you are looking for a good challenge, with an interesting story, then you should definitely pick this up. If that does not sound like you, well, then proceed at your own risk.
Posted by DuncanR2N at 5:19 AM