Ratchet & Clank: Up Your Arsenal Review

Ratchet & Clank face off against the evil Dr. Nefarious 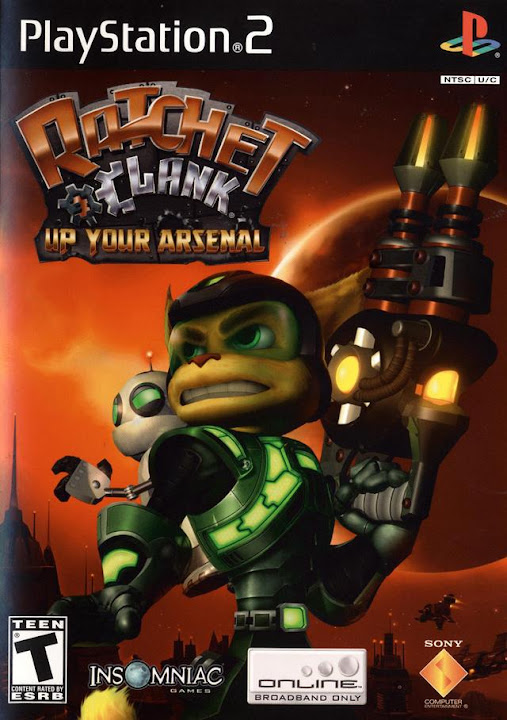 
Ratchet and Clank, after having saved the galaxy as we know it twice, are once again called upon to save the galaxy again from an invasion of the Tyrranoids. Along the way they will join forces with their friends, Qwark, Al, Skidd McMarxx, and their new friend Sasha.

Gameplay
You will run, swing, jump, and fly through the course of this game across over a dozen planets as you attempt to save the galaxy. Everything that you have come to know and love about Ratchet & Clank, is all here and then some. Exotic locales, powerful and sometimes quirky weapons (want to turn your enemies into ducks that lay explosive eggs?), and excellent and challenging platforming elements are all here. But lets face it, if you are playing a Ratchet game, it's cause you like to blow things up, right? 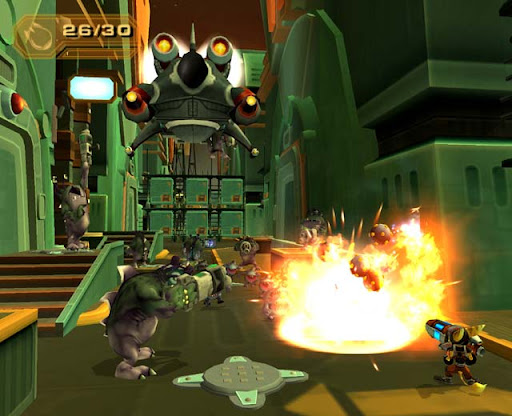 In addition to the weapons, Ratchet will obtain several gadgets through the course of the game that will allow him to get access to otherwise inaccessible areas or just make things easier in general. Gadgets like Gravity Boots (allowing Ratchet to walk up certain types of walls) and Map-O-Matics (full version of all maps including secret areas) will become available through the course of the game. As in the previous games when you want to hack a lock you get taken to a mini-game, which for this version is game that is reminiscent of the old arcade game Tempest.

The game will change pace periodically and let you control Clank (as in the previous games), drive hovercrafts, and drive buggies. The only drawback was that there was no rail grinding.

One of the great things about Up Your Arsenal is the new control scheme that is now available, the Strafe-Lock mode. Previous versions of Ratchet have used a more traditional Mario-esqe platforming control scheme which if you're playing a traditional platform is just fine. But in Ratchet you're constantly having to shoot things, and for those of us who are used to first and third person control schemes for shooters, the controls sometimes felt a bit wonky. With Up Your Arsenal, you can play it that way if you prefer, or you can switch to a control scheme that is more shooter-friendly. Once I enabled Strafe-Lock mode, I never looked back.

New to this game is the auto leveling of Ratchet. In addition to the individual weapons that level up, Ratchet himself will gain experience over the course of the game to a max of 100. No more searching for additional Nanotech. You just get stronger as you go. You can also buy better armor over the course of the game. The best armor will negate a whopping 80% of damage dealt but costs a million bolts. I stuck with the Aegis Mark V with it's 66% damage reduction and was just fine.

There's tons of other interface enhancements that are present in this game as well. Many items are context sensitive, so that if I'm standing on the Hacker pad, I don't need to go select the Hacker from my inventory, I just press the triangle button to use it. They've also given me more room on my weapons ring. Press the triangle button to pop the weapons ring and while it displayed, press the R2 button to bring up a second ring of weapons.

Gameplay was top notch and clearly improved on the previous two games.

Graphics
This is probably the best a Ratchet game has looked on the PS2. There's tons of items on the screen and even when you get into a heated battle with tons of enemies, bolts, gunfire, lava, or whatever else, the framerate is still silky smooth. The game supports progressive scan for those who want 480p, and looks great. You can also run the game in widescreen mode but it's not true widescreen and just chops the top and bottom of the 4:3 image, and then stretches it to fill a 16:9 TV. I ended up playing with progressive scan enable with a 4:3 image. 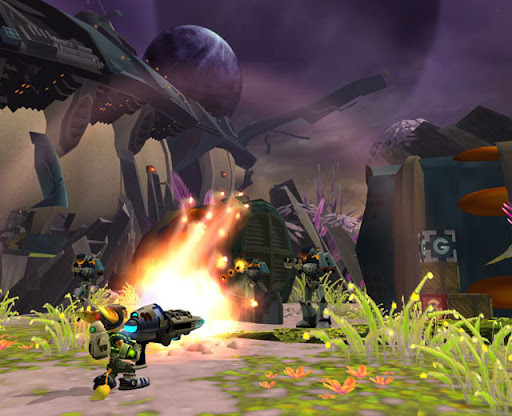 Sound
The sound is top notch. The cast from the previous game returns once again to voice Ratchet, Clank, and Quark and they do an excellent job. Ratchet is voiced by James Arnold Taylor (who you may know as Gabe Logan from Syphon Filter, Tidus from Final Fantasy X, or Obi-Wan from pretty much every Star Wars property since the original Clone Wars cartoons) and once again does a fantastic job as the cocky Lombax hero. Clank is voiced by David Kaye (also known as Nathan Hale from Resistance) does an excellent job as Ratchet's sidekick. Jim Ward is Qwark, the nutty pseudo-hero. And joining the cast for this round is Armin Shimerman (best known as Quark from Star Trek: Deep Space Nine) as Dr. Nefarious.

The music is fantastic, David Bergeaud and Niels Bye Nielsen both did a fantastic job setting the tone for the game as a whole and the individual levels for the game.

If you've got a nice setup for your PS2 and are using to the digital output, you can take advantage of the Dolby ProLogic II support and believe me it sounds great.

Value
The core game will take you roughly 15-20 hours. On top of that there's a ton of thing things to do from Arena battles (essentially Ratchet in gladiatorial combat) to searching for Titanium bolts to earning the elusive skill points. Once you complete the game you can run the game in Challenge Mode which lets you replay the game on a harder difficulty while retaining all your weapons bolts and upgrades from the first playthrough. In challenge mode, weapons will be able to reach higher levels than that available in the first playthrough and Ratchet will be able to gain additional experience, allowing his health to max out at 200.