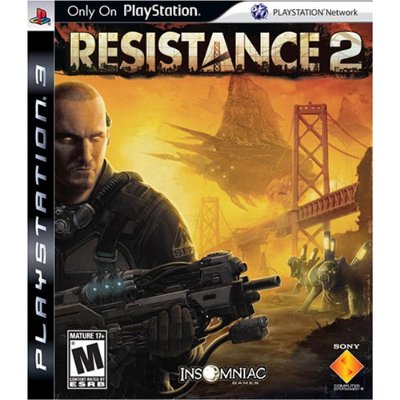 
The second installment in the Resistance series takes us on various twists and turns through intense battles and set piece sequences against immense boss characters to leave us with a shocking ending and the mysterious words…”this is only the beginning”.

Story
In R2, Lt. Nathan Hale and Sentinel Team Echo travel across the U.S. in an attempt to stem the advance of the Chimera and recover Daedalus, a former comrade overtaken by a failed cure for the virus that only proved to accelerate his conversion. To add to the circumstances, Hale is slowly succumbing to the virus himself and must complete his mission before the transformation is complete.

Gameplay
For me, everything in Hale’s second adventure is a vast improvement over the first. Tweaks to the single player campaign include completely regenerative health, the ability to sprint, a new two weapon system like Halo, tighter pacing to keep up your sense of urgency and that there are real stakes, and finally the biggest change…generous checkpoints. So many times in R1, I was frustrated by the spacing of checkpoints in later levels. Throughout many, if not all, of the levels we’re treated to set piece battles against an enormous enemy several times our size. My favorite of all those has to be in Chicago where we face off against a leviathan much bigger than my precious Cloverfield. There are pieces of that mission that reminded me of such movie genres as survival horror, war epics, and the classic city stomping monster.

Graphics
Graphically, R2 is much more detailed and benefits from a broader visual style than its predecessor. Because we visit many locales as varied as Iceland, San Francisco, Chicago, Utah, Louisiana, and Mexico we never feel like we’re going down the same old bland corridor. Besides the environments, we are treated to large scale bosses and attacks from dozens of enemies all without ever seeing a dip in performance or graphics.

Sound
The sound is probably one of my favorite pieces of R2. The sound effects, voice acting, and soundtrack are all great but the real star comes in the form a radio talk show you hear throughout the game. The show is hosted by Henry Stillman as he speaks about the Chimeran invasion and the terrors he’s seen as he holds up in his studio unaware if anyone is even left to hear his broadcast. His stories are well produced and really paint a horrific picture of a man losing grip of his sanity.

Value
Besides the compelling campaign and standard multiplayer modes, we are treated to a new cooperative campaign that can be played with up to 8 players online. In this mode, we navigate through a side story of Resistance through class based team combat. The classes consist of soldier, medic, and spec-ops. Each is integral to the team’s success. The soldier can deploy a shield from his mini-gun and absorb damage for his team. The medic can siphon health from enemies to re-distribute amongst his squad. The spec-ops is responsible for supplying the unit with ammo and dealing massive damage with his ranged weapon. Needless to say, this mode alone is deep enough to keep you coming back to R2 for quite a while.

The Bottom Line
There isn’t a better FPS on PS3 with as much deep and varied gameplay as R2. Everyone should experience its story and unique co-op mode. I can’t wait to see what Resistance 3 will bring.
Posted by PanzerNinja at 12:42 AM