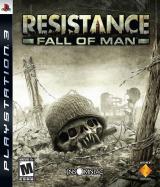 
With Insomniac’s first entry on the PS3 we were given a truly great launch title that introduced us to Nathan Hale and the beginning of man’s fight against an enemy worse than the Nazis.

Story
The Chimera, an extraterrestrial force with far more advanced technology spreads mysteriously across Russia and Europe like a plague converting humans into a hybrid of their culture destroying everything in its path. Because of this threat WWII never happens as nations of the world now have an outside threat to unite against. When we jump into the boots of Nathan Hale, an American Army Sgt., much of Europe is destroyed with Britain desperately trying to hold off the Chimera.

Gameplay
At first glance, Resistance looks like a standard FPS but once you get into the game and sample the imaginative weapons you realize that it’s more innovator than imitator. The unique arsenal you have access to includes traditional human weapons and Chimeran hardware. Each weapon has an alternate fire that either increases its effectiveness or could help to defend you. A favorite was the Auger which not only allows you to see targets through walls but once activating its secondary feature provided an energy shield directly in front of you for a short time. Also included in the mix were several grenade types such as a standard frag, a hedgehog which sent out spikes as it detonated, and air fuel grenade that would stick to surfaces and release a gas that it could then ignite to incinerate anything in the area.

Graphics
Resistance’s visuals, while great for a PS3 launch title, were overshadowed by Gears of War which released around the same time for the 360. Like Gears, its color palette was on the dark side and gave the game a bit of a drab look. Where Resistance excelled was in animation and detailed flourishes to the weapons and their affects on the enemy. One of my favorite details was that if you were accurate enough, you could sever the tubes of the breathing apparatus on the Chimera backpack which would then flail about venting gas.

Sound
Most of Resistance’s soundtrack feels like it belongs in the period and helps to sell the environment and the scenarios you find yourself in. Enemy grunts, growls, and weapons fire all shine in surround sound.

Value
With its couch co-op and variety of online modes, Resistance has enough to bring you back for multiple sessions to stomp the Chimera or your buddies on the battlefield.

The Bottom Line
Resistance: Fall of Man is a game that every PS3 owner should play and own. Its unique story and weapons are among the best of the next generation of first-person shooters.
Posted by PanzerNinja at 11:20 PM