A journey to Filgaia that was surprisingly enjoyable! 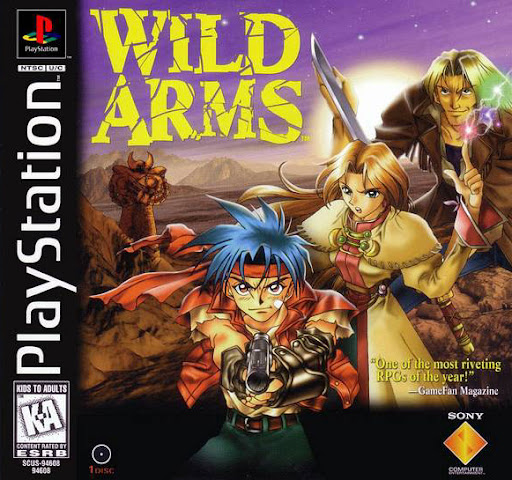 
I had never heard of the Wild Arms games until the release of Wild Arms: Alter Code F. I saw that in the stores, went home, read some reviews and found out about the Wild Arms series. I hate starting a series in the middle, so I decided to track down a copy of the the original Wild Arms and give it try. This has been one of the best eBay purchases I've ever made. I won't rehash the story here; I'll just say that the story follows the adventures of Rudy, Cecilia, and Jack as they (surprise!) try to save the world from the evil Metal Demons.

Gameplay
Gameplay consists of running around the world and exploring dungeons to achieve various objectives. With the obvious exception of the boss battles, all the battles both in the dungeons and on the world maps are random, pretty standard for a 1996 game. However, Wild Arms does add some twists to the gameplay. Each of the characters has a set of 'tools' that they can use while exploring the world's dungeons. For instance, Rudy can use his bombs to remove obstacles and all him to get to areas that was otherwise be inaccessible. As the game progresses each character will earn new 'tools' for a total of 4 tools for each character.

Battles are turned based where the player will pick an action for each character at the opening of the round. Once the actions are selected, the round will start with each character (and monster) attacking based on their speed. As the battle progresses, each character will build up Force which will allow a character to use a special Force power once enough force is built up. For most battles, you won't use the Force abilities much as they are over too quickly and you never have enough time to build up enough force power. Boss battles are a different animal, by the end of the game, you'll find that you will build up all four levels of Force more that once through the course of a single battle. Each character has a unique set of Force Powers that allow them to use special abilities such using ARMs (Ancient Relic Machines, which are basically a ancient set of really powerful weapons that only Rudy can use), Sword Tech, summon Guardians, etc.

Graphics
This is probably the weakest point of the game. The the game is a mix of 2D and 3D graphics; 2D when you are on the world map, in dungeons or in towns, and 3D when in Battles. The 2D graphics are well done but look like they could easily be replicated on the SNES hardware. Graphics switch to full 3D when entering a battle but even there, the 3D models aren't as detailed as other PS1 titles.

Sound
The sound was well done, but by the end of the game, I was very familiar with the sounds of the injured monsters, as the injury sounds were constantly being recycled throughout the game. Other than that one minor point, the sound was well done. In fact, one of the highlights of this game was the music. The soundtrack for Wild Arms is easily on par with any of the Final Fantasy soundtracks.

Value
In addition to the main storyline, which took me roughly 35 hours to complete, there are numerous side objectives to take up even more of your time. Each of your characters has an 'ultimate' armor/weapon/head set that is earned by fighting optional bosses, some of require a dungeon crawl to get to, others you will need to find in certain locations on the world map. Running around trying to acquire all the various weapons or armor help to add a decent amount of time to the game.

The Bottom Line
In end, I had a great time with this game. I thoroughly enjoyed the storyline, which had it's own surprising twists and turns. While I admit that the graphics seemed to be a bit dated compared to it's contemporaries everything in the game just seemed to work.

Before I wrap up there are a couple of things I would like to point out that this game did that should be included in every game. First, when buying a new piece of equipment, the game asks you once you make the purchase if you would like to immediately equip it from within the shop menu. I really appreciated this tiny question, because it saved me from exiting the store's purchasing menu, opening my character page, equipping the item myself, and then talking to the shopkeeper again so I could sell the item I just unequipped. I would simply buy the new piece of armor, equip it and sell my old armor without ever leaving the shop menu. A little thing, I know, but it was greatly appreciated. Second, Wild Arms has ability to load a save game, at anytime, or anywhere. Why there are so many console games that force you to reboot the console just to reload a game is beyond me. In fact, the whole save game menu was really nice, I could save, load, or view both memory card and copy save games from one memory card to another (even save games from other games) and delete games, all from the in game menus.

Overall I had a great time with this game and I would recommend this to anyone looking for a solid old-school RPG.
Posted by DuncanR2N at 6:59 PM