A great place to start for a first time Tales player. 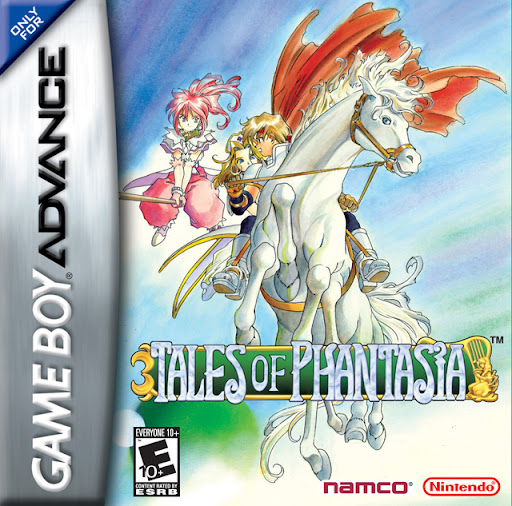 
Tales of Phantasia for the GBA is a remake of the original Super Famicom Tales of Phantasia that was only released in Japan. The GBA version marks the first stateside release of Tales of Phantasia and as such gives the player a nice trip back in to the days of the SNES while still playing something new. One thing to note, this is my first Namco Tales game so I had absolutely no bias from latter Tales games when I played this.

Tales of Phantasia (ToP) follows the story of Cress and company as they fight to rid the world of the time travelling villain Dhaos. Throughout the game you are constantly jumping into dungeons and travelling from town to town looking for allies and information to assist you in defeating Dhaos. Dhaos has the ability to jump through time so at certain points in the game you jump into the past and forward into the future as you pursue him. The story itself isn't overly complex but the characters are nice and you get to see some good character interactions with your party members.

Gameplay
ToP is what is commonly known as an Action-Roleplaying game. The battles are real time and work a bit like a fighting game. You are in control of one character (Cress) and by pressing the D-pad and the A button will cause you to thrust, slash, upward slash or several other moves. Cress also can perform special moves or 'techs' that you execute by pressing the D-pad and the B button. Your other party members will fight according to the 'script' that you have given them such as Full Magic, No Magic, Do Nothing, etc. At any time during the battle you can also give explicit orders to your teammates should the need arise. I found that for the most part the party AI did a pretty good job during the majority of the battles and I really only had to get involved during major boss battles. It was a surprisingly complex system (in a good way) that I still felt I was in the process of mastering even in the final dungeon.

Graphics
Graphics are good for a GBA game, although not on par with the original SNES release. I was pretty impressed at how well the battle animations worked and they never felt jumpy. I feel that I must point out that once you defeat an enemy, the animation slows down a bit. This never bothered me as I just assumed it was a bit of Matrix-style effect once you won the battle but there are some that feel that it detracts from the gameplay, and others have even gone so far as to say that it is a bug. It worked for me and I never had a problem with it.

Sound
Music is nice and varied but nothing really groundbreaking. The sound effects are good but the voices when casting spells and using techs could use a little work. Some of the phrases don't even sound like they are speaking English.

Value
I put in 50+ hours on this game and I still had not completed all the sidequests. For those of you who really like the pain of collecting EVERYTHING there is a Collector's Book that keeps track of everything to hit you inventory. To ease the pain, once you've completed the game once, you can start a new game and keep everything that was in your collector's book from the last game. Completing the game also unlocks a mini-RPG titled 'Let's Go Arche'

The Bottom Line
Overall I really liked this game, and I'm looking forward to playing more of the Tales games in the future.
Posted by DuncanR2N at 7:20 PM