The popular Resistance franchise takes its fight on the go with a sequel for the PSP. 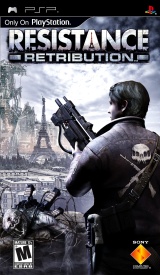 
In this sequel to Resistance: Fall of Man, we’re introduced to James Grayson and take up his quest for Retribution against the Chimera.

Story
As the game begins, we meet James Grayson at his lowest point. He finds his brother, a fellow Royal British Marine, in a Chimeran conversion center and kills him before the transformation is complete. After this, Grayson goes rogue on suicide missions to destroy as many Chimeran facilities as he can until he is caught and sentenced to death for desertion by the Marines. Before the sentence can be carried out, it’s decided to loan Grayson to the Maquis in part for his experience but mostly because their mission is considered a one-way ticket.

Gameplay
Retribution plays much like its predecessors, except in a third person perspective. The game uses the face buttons as a second analog with the d-pad functioning as your reload, switch weapon, manual aim, and action button. While most of the time you are aided by a generous auto-aim feature, later missions require a level of marksmanship not easily achieved without a second analog nub. Along with the new perspective is a much welcomed cover mechanic. Grayson will automatically attach himself to cover once you run up to it, however, he can not blind fire behind it. The need to stand while shooting makes cover more of a breather to plan your next move rather than a safe haven for camping. Aside from the new features of this title, a familiar favorite makes its return. The weapon wheel allows you to pick from your armory if you hold right on the d-pad or if you tap right it’ll cycle through everything that has ammunition.

Graphics
The visuals in Resistance Retribution are among the best I’ve seen on the PSP. A lot of the effects from the PS3 versions have translated well to the handheld, such as the Auger casting silhouettes through walls. Animations and character detail are both also really well done.

Sound
One of my favorite things in this game has to be the sound. Especially helpful are the different growls of the various Chimera and enable you to switch to the most effective weapon before they are in sight. The weapons and soundtrack seemed identical to what was offered in R1 and sound great both with and without headphones.

Value
If you have a PSP model 2k or 3k, you can connect to the PS3 and Resistance 2 for a couple of extra modes. Plus mode allows you to control the game with a dualshock 3 or change up some scenarios in another mode called Infected. Infected mode gives Grayson abilities like regenerative health, being able to breath under water, and some weapons from Resistance 2.

The Bottom Line
As a fan of the Resistance series I think this title is a must buy. Its story and presentation are truly great. Be warned though that the difficulty spikes towards the end almost unfairly, but if you push forward, the overall story more than makes up for it.
Posted by PanzerNinja at 10:46 AM