Cole is just a regular guy, trying to make ends meet. He's got a nice girl, good friends, and really doesn't ask for too much. He's a courier in a big city, who one day, is asked to deliver a package that will change his life... 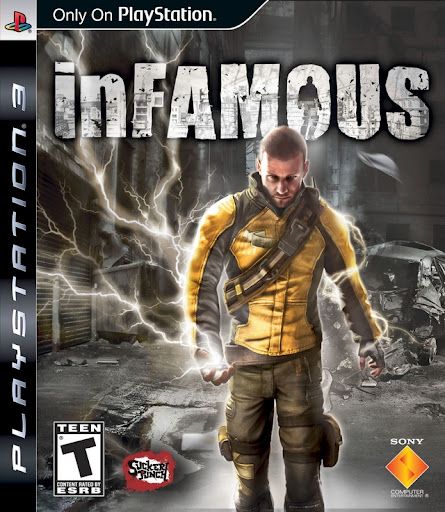 
After a huge explosion that destroys an entire city block, Cole wakes up to social chaos. The entire city is locked down under a government quarantine. People are sick, hungry, and dying. No one knows what is going one, least of all Cole, who now, for some unexplained reason, can control electricity.

Gameplay
You play the game as Cole. You don't know why, or how, but since the explosion, you have the ability to pull energy and store it for use. Your primary use will be zapping your enemies, but through the course of the game, you can additional powers such as healing, shockwaves, and lighting storms (my favorite). Your goal is to find out who is behind the chances and why they are happening.

The game takes place in Empire City, which is a large metropolitan city that spans three islands. At the outset of the game you only have the access to the island you started on but as the game progresses you will unlock the ability to eventually be able to roam anywhere in the city. You open new areas by reactivating the power sub-stations for each area. Once you activate a power sub-station, you unlock a new power. This method works very well, as each time you get a new power, you then have to traverse an area under the city that conveniently requires the use of the new power, and therefore lets you really test it out to learn how it works.

Due to the changes that have happened to Cole, he also has the ability to scale tall buildings, fall from heights that would kill a normal human. This is good because most of your enemies (tho not all) like to roam the streets so staying up high makes it easier to move around. As you move through the city, you can pick up Blast Shards and Dead Drops. Collecting Blast Shards will increase the total energy you can store and Dead Drops are recordings (think audio diaries from BioShock) that explain some backstory. Both are easy to find as you have a radar ability that will show any power sources, Dead Drops, and Blast Shards on your mini-map.

Completing story elements, side-quests, and defeating your enemies earns you experience that allows you to upgrade your existing powers. However, one of the nice features of inFamous is that you also have a Karma meter that shows how good or evil you are. There are several Karmic Moments in the game that force you choose between good or evil, such as sharing food (good), or taking it for yourself (evil). Once you make a choice, you have a Karmic shift that will display in the upper left corner of you screen. Your actions then determine whether you can unlock the good, or evil upgrade to your powers; the good upgrades being more defensive and the bad upgrades allowing you to unleash more destruction. Stick with your good actions, and you'll eventually be a Hero, continue to choose evil, and you'll be branded as Infamous.

Either way you choose, the story plays out essentially the same, but if you are a trophy hunter, you'll have to play through the game at least twice as there are trophies that will unlock depending on how you choose to play. The people of the city do react to you based on your Karma level (cheering and clapping for Heros, and throwing rocks for those who are Infamous). Your look will also change; clean cut for Good, dark and brooding for Evil.

Graphics
In a Metropolitan city, there's a lot going on. inFamous handles this volume very well. There's dozens of people on the streets, cars, trains, and even the occasional plane flying overhead. It's one of the better looking games on the PS3 but that's not to say it doesn't have it's issues. Due to the sheer volume of items on the screen, as you move through the city, you'll see quite a bit of pop in. Things seem to appear/disapear on the streets at radius of 50-75 yards (that's just a guess). Most of the time it's not that noticeable as there's enough other items on screen to 'hide' the pop-in, but when you do see it, it's a bit jarring.

As you progress through the story, you'll find that the game is broken into chunks that happen at certain times of day. This is really impressive as the city gets a different look and feel based on whether it's nighttime, morning, full daylight or the evening. The 'time' is static, meaning that if it is nighttime, it will stay nighttime until you get to the mission that takes the story to the next day. But the lighting is well done and it a very nice touch, especially with the morning and evening times rather than sticking with full night or full daylight modes.

Character animation is, for the most part well done. I thought Cole looked a little goofy when climbing up poles or gutters, like the animation was just a bit off, but other than that it was solid.

Sound
Sound was solid. Voice acting was well done, the characters never felt out of place and the lines were delivered well. There really isn't much music to speak of (or at least not that I noticed) so there's not much to say there.

Value
There's some significant content in inFamous. The main story can be played through twice, one time through shooting for Good karma and one for Evil. In addition to that, there are several side missions that will allow you to 'reclaim' sections of the city back from your enemies. Most of the side missions aren't anything spectacular. You may be asked to remove devices for buildings, escort people, or simply take out a bunch of enemies, but they do add a bit of variety to the game as well as additional experience that you can use to max out your abilities.

The Bottom Line
All in all, inFamous is a great game. If you own a PS3, you need to play inFamous. If you don't own a PS3, this is one of many reasons that you should get one.
Posted by DuncanR2N at 5:26 PM