With the Master Chief off-world, its up to the ODST to complete a crucial mission in New Mombassa. 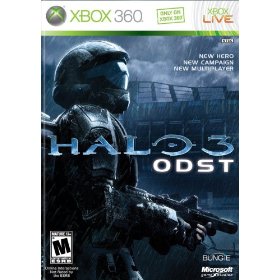 
Taking place during the events of Halo 2, a group of ODST drop into New Mombassa to secure an element that may be the key to turning the tide of the war against the Covenant.

Gameplay
In Halo 3: ODST you play as a rookie Orbital Drop Shock Trooper. Since you are no longer an armor-sporting, duel-wielding, equipment-dropping, shield-recharging Spartan, you will have to employ a more tactical approach to confrontations. Thankfully, you’ve got a silenced pistol that can knock out most enemies at long range, generous checkpoints, and an abundance of health stations in each level.

Unlike the previous Halo games, ODST uses a hub world to get you into the action. The rookie finds clues to his teammate’s whereabouts and trigger flashback sequences that allow you to play as other members of the squad. Once you take over the other squad members, you play in more familiar well lit environments. These missions felt more comfortable and were much more memorable than those of the rookie.

As you roam the streets of New Mombasa at night as the rookie you will have to rely on stealth and your tactical visor that outlines teammates, enemies, and objectives. While the visor produces a cool effect, I had to have it activated constantly in the night environment leaving me to miss out on the detail in the night cityscape.

Graphics
Built on a modified version of the Halo 3 engine, ODST at times looks sharper than its predecessor. The graphics really shine on the outdoor daytime mission Uplift Reserve but in most missions it felt like the same old Halo. One thing that stood out for me was the robotic animations and bland textures of the human characters’ faces. From the first cutscene I remember thinking the faces of the ODST seemed a step back in graphical quality.

Sound
The music in Halo 3: ODST reminded me of a mix of the familiar Halo score and the soundtrack to Blade Runner. While that appeals to me, I imagine a lot of Halo regulars will be somewhat disappointed in the noir atmosphere created by the score. Sound effects were typical Halo fare, although I felt like the ODST standard SMG and silenced pistol could have used more punch.

Value
Whether or not ODST has lasting appeal will entirely depend on a player’s like of cooperative and competitive gameplay. Cooperative campaign will be fun a time or two but most of my return visits will be spent in the excellent firefight mode. This mode is like horde in that you face off against waves of Covenant but there are random skull modifiers applied to each round to increase the difficulty. To me, this mode was much more fun than horde because you had to constantly be on the move switching up weapons to stay alive.

The Bottom Line
I have to say that Halo 3: ODST would best be appreciated by fans of the Halo universe. Gamers who have only played Halo 3 will think it’s a weaker effort as you lose a lot of abilities and will be frustrated by the AI on the higher difficulties.
Posted by PanzerNinja at 5:27 PM