Roll, bounce, and split yourself to save the LocoRocos. 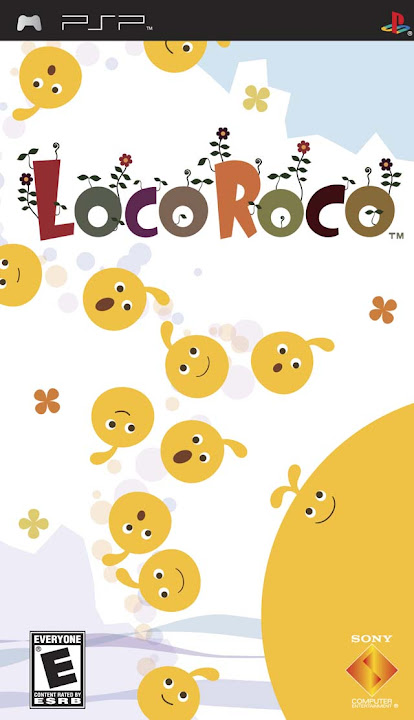 
So you're a planet, minding your own business, when you are hit with a meteor. Now that would be bad enough for you but when the meteor starts spilling out Mojas that start eating the natives, the LocoRocos, you probably want to do something about it so your whole ecosystem doesn't get messed up. So, your job is to save as many LocoRocos as you can.

The LocoRocos, while very adept at singing (more on this later), aren't really good at anything else, which is why you, as the planet, have to help them survive.

Gameplay
On one hand, LocoRoco is a very straightforward 2D platformer. You have 5 'Worlds' each broken down into several levels. You simply have to navigate through each level and make it to the end to move on to the next one. However, LocoRoco differs from traditional platformers in that you don't actually control the LocoRocos directly. You are the planet, and you have to tilt and bounce to influence the movement of the LocoRocos in order to save them. The controls are simple; the left shoulder button tilts the world to the left, and the right shoulder button tilts the world to the right. Press both simultaneously, and you will shake the world, causing the LocoRocos to 'jump'.

Each level starts you out with a single LocoRoco, but as you roll your LocoRoco through the level, you will run into special plants that increase your LocoRoco count. As your count goes up, your LocoRoco gets bigger as well.

There are several obstacles that you will come across as you move through the levels some of which are harmless but do hinder your progress, others, like spikes or the Mojas themselves will harm you and decrease your LocoRoco count. If you hit zero, you'll have to start the level over.

One of the great things about the game is the while it was simple to control, for the most part, the gameplay always felt fresh as the game kept throwing new things at you that changed how you played. However, you do perform a lot of the same actions due to the limited controls.

Graphics
The graphics are straight 2D, there's nothing really fancy here, but they do look good and it's easy to see where you need to go. The level designs are simple and straightforward; look at the cover of the game, and you pretty much know what you are in for. However, the world feels like it's alive and moving. It seems like there's always something going on to help keep you engaged.

Sound
This is one area where the game shines. The music in this game is so unique and the tunes are very catchy. What's really great is that the LocoRoco is providing the vocals for the song as you go along, and if you hit the Square button to break them from 1 LocoRoco to multiple LocoRocos the song will change so that instead of a single voice, the song will have the main tune with backup vocals and harmonies. The more LocoRocos you've collected, the more harmonies you'll hear.

In addition to the music the atmospheric effects are great. The various creature you run into all have unique voices and sounds and really bring the world to life.

Value
While you can probably beat the game in under 10 hours (it took me 9 hours), there's more to keep you occupied. There are several things in each level to feed your OCD. For every level, there are a total of 20 LocoRocos to get, 3 MuiMuis (friends of the LocoRocos) and a ton little fruits and and more. Each level will show you your total counts once you complete it so you'll know how many you missed.

Additionally, as you complete level and collect items, you will earn items to use to build your own LocoRoco house, which is like a fun house of sorts that will allow build your own little LocoRoco level.

The Bottom Line
If you enjoy platformers and you need something for your on-the-go playing, you should definitely give this game a look. The gameplay does get slightly repetitive, but each level can be completed in approximately 10 mins or less, so it's great for bite-size gaming. The retail price of $19.99 (or less used) also makes this an even more attractive title. Is it the best platformer int he world? No. But it is a fun, quirky experience that any PSP owner should check out.
Posted by DuncanR2N at 3:17 AM