Olympus has sent a message, and I am here to deliver it. 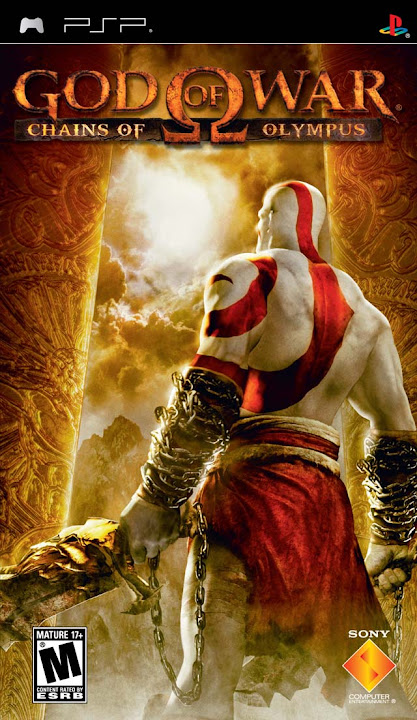 With God of War III just around the corner, I figured it was time to get my act together and give this game a playthrough. Kratos once again returns and brings his unique form of vengeance upon his enemies. Set before the events in the first game, we find Kratos fulfilling his obligations to the Gods of Olympus. Haunted by what he has become, he still follows their orders. Through the course of the game, Kratos becomes more and more dissolutioned with the Gods and in the end must make some very difficult personal decisions, ultimately starting him on the path that we experience in God of War I & II.

Gameplay
This is God of War to the core. All the gameplay you've come to know and love is here in spades. The game translates surprisingly well to the PSP. Many times when games are translated to the small screen the controls are what take the biggest hit. While there were some modifications to the control scheme due to the lack of a second analog stick and missing shoulder buttons, it controlled almost as well as it's console counterparts. 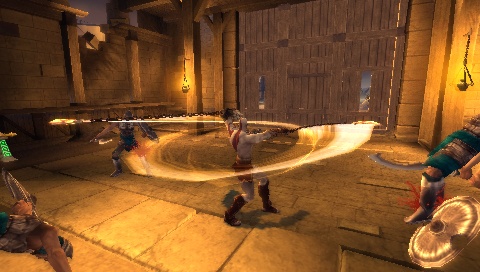 Kratos unleashing the fury with his Blades of Chaos
You start off with the signature Blades of Chaos, and through course of the game you will earn abilities, weapons, and upgrades to help you with your quest. By far my favorite were the Gauntlet of Zeus, an incredibly powerful gauntlet that pretty much demolishes anything or everyone that gets in it's way.

Gorgon Eyes and Phoenix Feathers are again hidden throughout the game to help you upgrade you health and magic. You'll collect red orbs from chests and fallen enemies to upgrade your weapons. There's a liberal amount red orbs in Chains of Olympus so you should be able to upgrade most (if not all) of your abilities. I was able to fully upgrade my health, magic and all my weapons without too much effort. 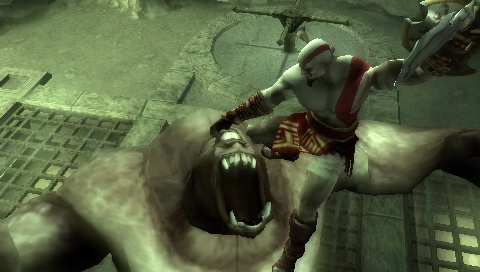 A Cyclops doesn't do so well without his eye
My only complaint with the game is some minor balance issues. In general, I found that the boss battles were actually easier than some of the big beasties. On top of that, the game had a few long stretches that went with nary a save spot or a green health chest. The console games seemed to have a better balance and pacing when came to the level design. It's by no means a game breaker, but it was noticeable, especially on a handheld game, where frequent saves are always better for on the go gaming.

Graphics
This is one of the best looking PSP games I've ever seen. I was constantly amazed with some of the set pieces and what they were able to pull off with the handheld. From the moment you take hold of Kratos to the end of the game, it's a visual spectacle that continued to impress. It was amazing to see that level of quality and detail in the palm of my hand. 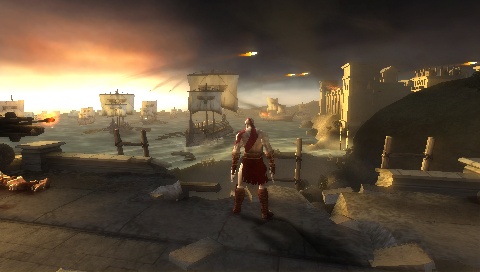 Kratos admiring the fire raining down on Attica
One thing to note, one of the things God of War likes to do is show scale, on the big TV this worked fine as the camera pulled back and gave you a grand view, and you see a tiny Kratos in comparison. Chains of Olympus likes to do this as well and while it does illustrate the scale, Kratos ends up being so tiny that you almost can't see him. So what is impressive on the big TV, ends up being almost humorous on the little screen. It's a minor complaint, and really didn't affect anything else but I just thought I'd note it.

Sound
There's really not much to say about the sound other than it was just short of perfect. Both TC Carson and Linda Hunt reprise their roles as Kratos and the Narrator. The music is there, the effects, everything is exactly what you'd expect. I just wish that they had brought back Michael Clark Duncan to voice Atlas.

Give that the sound is so well done, I'll give you a word of advice, if you are going to play this don't play it through the standard speakers, either get some headphones, or, better yet, plug it into some decent full-range speakers. You won't be doing the sound justice if you listen via the speakers on the PSP.

There's really not much more to be said about the sound other that it was excellent.

Value
Chain of Olympus comes with what you'd expect to see in a God of War game. The core story took me around 7 hours to complete, a bit shorter than the console counterparts but for the handheld the length actually felt about right. There's the standard extras, videos, art, costumes and additional difficulty levels. There's also the challenge mode, in this version it's the Challenge of Hades with 5 challenges to slug through with Kratos.

The Bottom Line
If you have a PSP, and you haven't played God of War, but are looking for a solid action title, you should be very happy with Chains. Be forward though, although the game is set before the events in the first game and therefore assumes some knowledge about Kratos. Some plot elements may not mean as much if you aren't familiar with the story.

On the other hand, if you like God of War, and you own a PSP, there's no reason you shouldn't own this game.
Posted by DuncanR2N at 2:31 AM