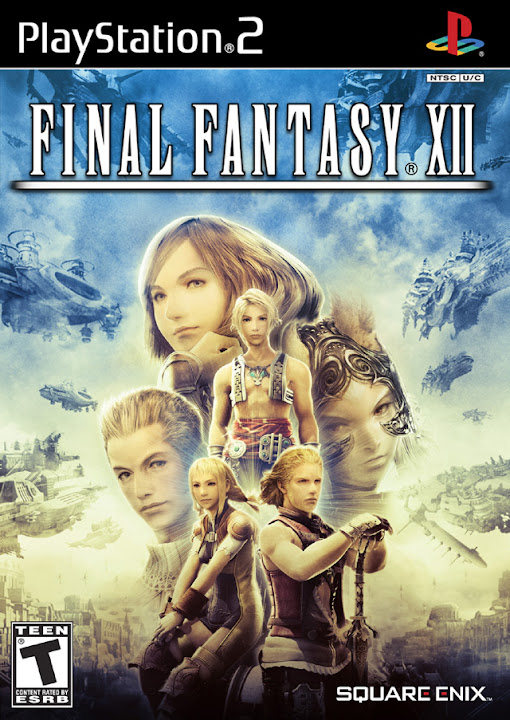 The game follows the story of Vaan (a young resident of Dalmasca), Penelo (his childhood friend), Basch (a disgraced soldier of Dalmasca), Balthier (a Sky Pirate), Fran (a Viera and Baltier's assistant) and Ashe (the princess in hiding) as they attempt to free Dalmasca from the oppressive Archadian Empire.

As the story doesn't focus on saving the world as we know it, it sometimes doesn't feel as epic as previous installments. In fact, for much of the game I didn't even really know (or care) about what I was doing. That was a problem in my book, because I didn't feel the drive to further the story. There are many who have said that this game is Final Fantasy meets Star Wars, and there are some great moments that are somewhat reminiscent of Star Wars, but I really didn't see the connection that much.

Gameplay
The gameplay follows to a certain extent, the pattern set by Final Fantasy X, there's no overworld map as in I-IX, however you can travel the world by running through all the levels that the game has to offer as each area (level) is connected to the others, meaning that while you never get the overworld view, you can still run from one end of the world to the other with a couple of minor exceptions. Where the gameplay takes a huge turn is with the introduction of the Active Dimension Battle (ADB) system, which is really just a fancy way of saying that everything happens in real time. In a nod to the MMO Final Fantasy XI, all the enemies are on the screen, and if you get close enough, they will attack. Get close to too many at once, you may be pushing up daisies real fast. So no transition to battle, no separate battle theme with a victory tune, just fighting the enemies in the field as you come to them.

In addition to the ADB, Final Fantasy XII introduces the gambit system, which is a way to program the AI of all your characters. This created a huge shift in the focus of the game as compared to previous games. With other Final Fantasy games, you called all the shots, for every character, for every battle. The gambit system essentially makes it so you are more like the coach, rather than an active participant. A gambit is essentially a piece of an AI routine, such as: "Ally HP < 50%". I could then take this gambit and couple it with an action such as: "Cure". Once assigned to a character (each character can have up to 12 gambits running at any given time), that character will automatically cast cure on any ally whose health has dropped below 50%. The system works so well, that by the end of the game, you could theoretically roll through any battle (including some boss battles) without pressing a single button.

Abilities are unlocked through the use of the License Board. As you battle, you earn points that you can use to unlock the use of armor, weapons, magic, gambit slots, etc. Anything that you can do or use has to be unlocked with the License Board. So while you may purchase Aeroga at the magic shop, if your character has not unlocked that ability via the license board, it will just sit in your inventory. Similarly, if you unlock Firaga, but you have not purchased the spell yet, you won't be able to cast it. There are no classes in XII and everyone starts the game all clustered around the same areas in the License Board which means that for all intents and purposes, anyone could be anything. It's a weak point in game as there are no clear roles.

Last are the Espers. Your old friends, Shiva, Ifrit and Leviathan are nowhere to be found. They have all been replaced with a whole new set of creatures (like Belial, the Gigas) and are woefully underpowered. Through the course of the game you pick up a few here and there and after licensing them (yes they show up on the License Board) I didn't even bother with the last few I acquired.

Graphics
Final Fantasy XII looks really good. There's really not much more to say than that. The camera has been freed up so you can look anywhere at anything, even in battle. One of the really nice this about that game is that everyone looks the same from a graphic detail standpoint. With Final Fantasy X, if you weren't a main character, you kinda got a shoddy model. Not so with XII, everyone is treated equally, at least graphically.

Sound
Voice work was solid, I had no issues with any of the voice work in the game, Fran's accent was odd, but fitting, and I really came to like Balthier's voice work. Musically, it was solid as well, long time series composer Nobuo Uematsu only contributed one song to the soundtrack and you can tell. That's not a bad thing either, as Hitoshi Sakimoto's soundtrack was very good, it's just it was a noticeable change.

Value
By the end of the game I had put in 90+ hours on this game and I don't think I was even close to completing all that this game had to offer. In sort, you get a lot for you money with this game. Between the Hunts, the optional Espers, trying to obtain all the spells, and ultimate weapons and such, there's tons to do.

The Bottom Line
Final Fantasy XII is an odd one for me. I did have issues with many of the design choices (oh Ifrit how I missed you), but at the same time, I did put 90+ hours into the game. Ultimately, I'd have to say it was a good game. It's definitely taken some departures from some of the known Final Fantasy conventions, but that's not necessarily a bad thing. My biggest problem with the game was the gambit system. I really felt by the end of the game, that I the player wasn't really playing so much as guiding the characters through the game. The gambit system worked too well, so I had nothing to do. The story seemed to meander a bit and take some time to really find the driving reason for you to move on (I was enjoying the hunts more than progressing the story for quite a while), and while I had six characters to play with, you only really needed three of them to beat the game. But even so, in the end it was a satisfying experience that I would love to revisit some day. I don't think it was quite worth of some of the accolades that were heaped on it by others, but it's definitely a good game.
Posted by DuncanR2N at 8:49 AM