Final Fantasy the way it should be (no cellphones please). 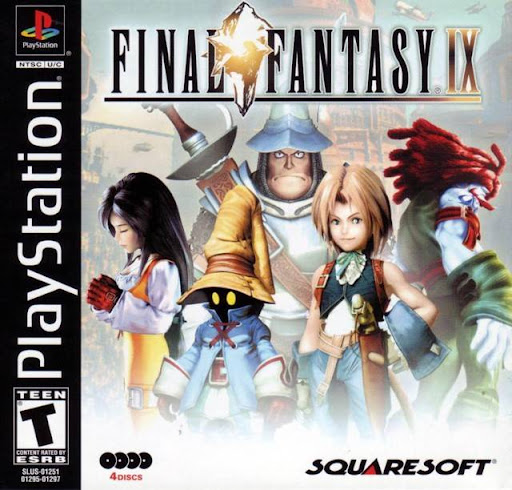 
Final Fantasy IX was the last Final Fantasy game developed for the Playstation console and as such the game itself was an homage to the entire series that had been released before it. The game brought the entire series back to it's roots with straight forward character classes and and return to the traditional fantasy settings that were in the NES and SNES games.

The game follows the story of Zidane (a thief), Vivi (a black mage), Princess Garnett (a white mage and summoner) and Stiener (a Knight) as they attempt to discover who is behind the corruption of the Queen of Alexandria. While the main story is fairly basic for an RPG (save the world), what really makes the game shine is the character development. I won't reveal anything here for those who have yet to play, but as you play through the game you really start to understand their feelings and motivations. Additionally, I felt that having Zidane as a strong, confident (and many times arrogant) main character was a nice departure from the reluctant heroes of VII and VIII.

Gameplay
Gameplay is fairly standard for a Final Fantasy game. You will lead your character throughout the world and will randomly be sucked into battles. In IX you are able to bring up to 4 characters into battle, and the battles use the same turn-based system that the previous games have used. Compared to the two previous titles, the magic/skill system has been greatly simplified. Every item in the game (weapons, armor, hats, etc.) can give characters abilities once they are equipped. If you equip the item long enough the character will learn the ability and will be able to continue using the ability even after the item has been removed. And that's it. No mucking about with Materia or Guardian forces. No having to draw magic from your enemies. Just equip an item and learn the ability.

Graphics
Building on their work in Final Fantasy VII and VIII, IX represents a stunning graphical achievement for the PlayStation. Characters were well animated, environments looked fantastic and the cinematics were outstanding. It is one of the best looking PlayStation games I've come across.

Sound
Much of what makes a Final Fantasy game so good is the music and the music in IX is outstanding. The music really helped bring the game and the environments alive. Nobuo Uematsu returns for the 9 time to score the Final Fantasy IX and tops his previous work. He revisits themes from the previous games as well as composing new ones that are memorable.

Value
I put in 60+ hours on this game and I still had not completed all the side quests. That's quite a bit of value for your dollar. The main storyline is very linear but at several points throughout the game you have opportunities to explore the world to and earn special rewards for completing various quests.

The Bottom Line
This game represents everything that Final Fantasy should be, Chocobos, Moogles, White and Black Mages, Summons, you name it. It represents the sum of all came before it and as such, it may not appeal as much to first time Final Fantasy players as it would to long time fans of the series.

That being said, it's still a solid RPG that can stand on it's own, however, if you are truly a Final Fantasy Fan and you have not played this game you are doing yourself a huge disservice. Find a copy, and get playing.
Posted by DuncanR2N at 10:11 PM