Ghosts in your mansion? Who you gonna call? Uh, Luigi? Okay, I guess. 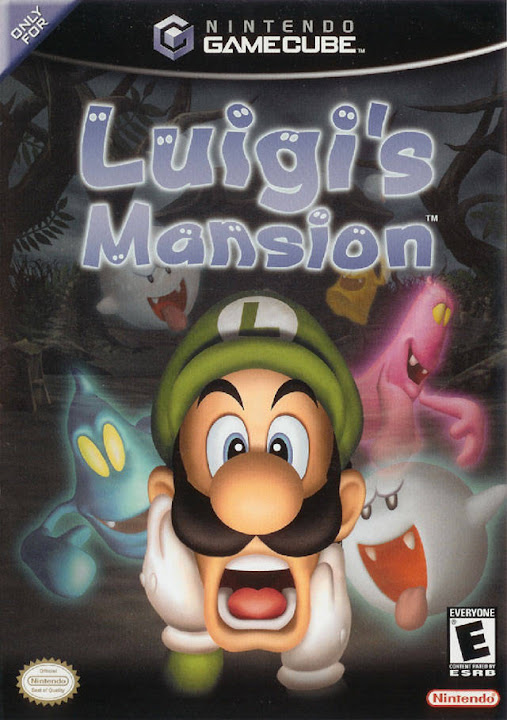 
First off, let me say that my son thinks that this game is one of the greatest Mario (Luigi?) games that he's ever played (and he's played alot of them, from Super Mario Bros on the NES up to Super Mario Galaxy on the Wii, with several Mario Party, Kart and Papers thrown in the mix as well) and he thinks that Luigi's Mansion is one of the best.

Now, hearing him rant and rave about it I decided to give it a whirl. Overall, it's a solid game, and for the most part I had a good time with the game, but let's break it down for you.

Story
As with many other Mario titles, the game begins with a letter, only this time it's not a letter inviting Mario to come to a party, rather the letter is for Luigi and it informs him that he has won a mansion. Unfortunately, all is not as it appears and not only is the mansion in question haunted, but apparently Mario got a similar letter and arrived just before Luigi and is now trapped somewhere inside the Mansion. Luckily, Luigi runs into Professor E. Gadd, who equips Luigi with the Poltergust 3000 and sends him off to catch the ghosts and rescue Mario.

Gameplay
Luigi takes center stage here and does a fantastic job as the lead. However, this game is very different than other Mario titles as Luigi tends to be a bit more down to earth; translation: there is absolutely no jumping, running, wall kicks, spinning, sliding, tumbling, or whatever else it is that Luigi's brother is so capable of doing. Luigi has one speed, and that is jog walk. He really only has 4 'moves' as well. He can suck things up with the Poltergust 3000, spit various elements (water, fire, ice) out of the Poltergust 3000, and push or tap various objects to 'open' them, or shine his flashlight on things, or more importantly, ghosts. And that is pretty much it. Don't get me wrong though, this isn't a bad thing, just different. In fact if Luigi had started leaping about like Mario I would've been disappointed. When you are playing Luigi, you know that you are Luigi because he acts different.

The main game consists of searching the various rooms in the mansion for ghosts and sucking them up. Each time you clear a room of ghost you get a key that allows you access to another room, then you catch all the ghosts there, get another key, lather, rinse, repeat all the way to the final boss. There's some variety along the way as each ghost that gives you a key has a different way to 'reveal' themselves. But once you reveal them, it's back the old standard of sucking up the ghost.

Graphics
Luigi's Mansion was a US launch title and as such I didn't expect too much in the graphics department. However the graphics in Luigi's Mansion are really solid. Everything is detailed nicely and lighting effects are done really well. This is of course important as much of the haunted feel of the mansion is due the lighting and shadows from either your flashlight or the occasional lighting strike. If your Gamecube or Wii is hooked up via the component cables, then you'll be able to run the game in 480p, a nice plus in my book. Strangely, the game doesn't advertise that it supports progressive scan on the back if the case. Perhaps Nintendo hadn't worked out all their label at launch and didn't add the progressive scan logo on the GC boxes until later.

Music/Sound
The game supports Dolby Surround, but even without it, the sound is very good. In addition to some key Mario tunes that are repeated throughout, the game has a few new haunting melodies. One really nice design move is that Luigi himself will hum along with some of the tunes as he tries to overcome his fears of the haunted mansion. Sound effects are competent, nothing outstanding but nothing lacking.

Control
My biggest beef with the game was here. I just didn't like the controls. I'm one of those that adhere to the idea that when I push the control stick up, I look up, and when push the control stick down, I look down. Luigi's Mansion, however, uses the airplane control. Push the stick forward and you look down, pull it back and you look up. And there is no way to change it. Took me a long time to finally get the hang of it. If that doesn't bother you, then you'll be fine.

The Bottom Line
Luigi's Mansion was a solid game that actually fits nicely in the Mario catalog and is a great change of pace for the series. Luigi was very capable as the main protagonist and I'd love to see him take on that role in future games.
Posted by DuncanR2N at 7:28 PM