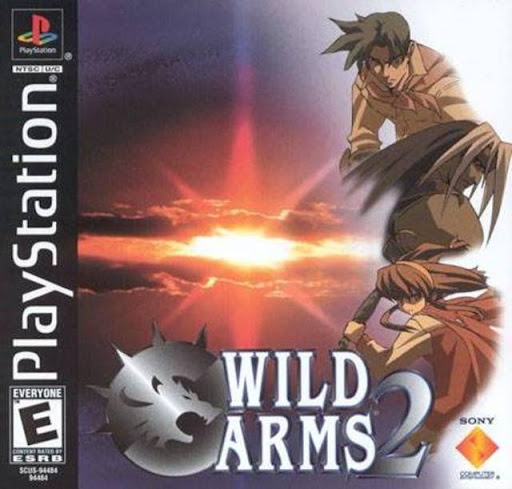 
In Wild ARMs 2, like ever other RPG out there, you and your party members need to save the world. Wild ARMs 2 is an fun, effective way to make that happen. You follow the exploits of young Ashley, Lilka, Brad, Tim and Kanon as they attempt to prevent the destruction of the world as they know it. I won't rehash the story here, so let's cut to the chase. Wild Arms 2 wasn't very well received in the gaming media, I think that is wrong. Let's break it down to see why.

Gameplay
Gameplay is fairly standard for an RPG. You control a party that will run around the world exploring dungeons and doing various quests that will drive the story forward. The story is much more developed than the first Wild Arms but unfortunately suffers from a pretty horrible translation. There are several times where the characters just seem to string a bunch of word together without any thought as to how a proper sentence should be structured. My guess is this fact is what caused the game to get so many poor reviews.

Wild Arms 2 introduces the 'Search' system which is also used in other Wild Arms games. The Search system is the means by which you will find towns, dungeons, or whatever it is on the world map you need to get to. As you run around the world you can search (by pressing the square button). However, for something to show up your character has to learn about it first from and NPC. Only then will it show up when you search. I know there are some who really dislike this aspect but I found that it worked well.

Characters in the game have a predefined set of skills that will grow through the course of the game. Both Ashley and Brad can use ARMs and will expand their arsenal by finding new ARMs through the course of the game. Lilka can expand her magic by using Crests (again found throughout the world) and using the crests to learn new spells. Tim can learn new magic spells from each of the guardians (think Guardian Forces in Final Fantasy VIII). Additionally as you level up, you earn Personal Skill points which can be applied to your characters to increase defense, add hit points, reduce the amount of Force power require to use skills, or however you want to apply them.

Battles are turn based and follow much the same formula as the first Wild Arms with a couple of twists. Like the first game, each character has a force gauge that will build up during battles. Unlike the first game, however, the force gauge doesn't start at zero at the beginning of each battle, the amount of force is determined by your characters' level. The force level also serves as your magic level, so as your characters level up, they will be able to use more complex magic right from the outset of the battle. Gaining force will also allow you to use special Force Powers during the battles. Casting spells does not deplete your force gauge but using the Force abilities does. Since the highest level Force Powers will completely drain your force gauge and therefore eliminate your ability to cast spells until the force gauge builds back up, managing the force gauge properly becomes key in later large boss battles. I found the combat system to be quite enjoyable and a nice change of pace from the standard MP-based RPGs.

Graphics
The graphics in Wild Arms 2 are a huge leap ahead when compared to it's predecessor. The world, towns, and dungeons are all modeled in full 3D which the characters are sprite (but very will animated). All the maps are fully rotatable and many puzzles require you to rotate the camera around to find the solution. Battles are rendered fully in 3D and are also a huge step ahead of the previous games. However, even with the graphical facelift, Wild Arms 2 is hardly the most graphically competent game on the PS1. It does well, but it nothing to write home about.

Sound
Sound effects were competent nothing really stood out as being exceptionally good or bad. Scored by Michiko Naruke (who scored the first Wild Arms), the soundtrack was good but not quite as good as it predecessor, but was still better than most of the PS1 era soundtracks.

Value
There are numerous side objectives to take up even more of your time. Scattered throughout the world are pyramids that house optional bosses that can choose to fight. These are not simple little fights, they are long drawn out battles that can and probably will take at least a half hour or more, there's a total of twelve of these bosses. To even fight these optional bosses you'll need to run through a couple of optional dungeons to get you the items you need. Basically, over and above the standard game play, you've got quite a lot packed in here.

The Bottom Line
Even with some of Wild Arms 2's faults, (mostly the translation actually) I had alot of fun with the game and following the adventures of Ashley and company. There's a great RPG here, but if confusing plot lines and preachy dialog scare you, you might want to stay away.
Posted by DuncanR2N at 8:15 AM