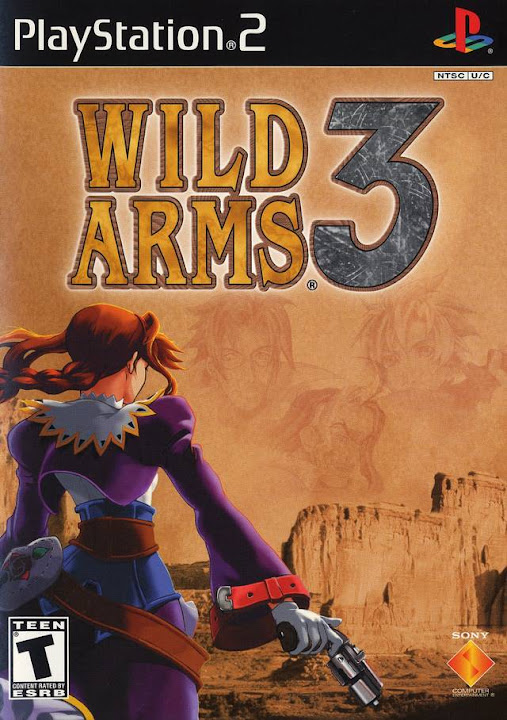 
Wild Arms 3 tells the tale of four "Drifters", people looking for adventure, on the dusty barren world of Fligaia. The game, moreso than the previous Wild Arms games, lays a heavy coat of spaghetti western (down to the whistling in the theme) as your party travels across the remains of Filgaia trying to understand how Filgaia became the barren wasteland it is now. Your party of Drifters, Virgina, Clive, Jet, and Gallows are thrust together during a chance meeting on a train and take it up themselves to find out why.

Gameplay
To do so, in typical RPG fashion, you visit different locales, talk to the inhabitants of Filgaia and explore dungeons as you learn more about the history of Filgaia and why the world has become a barren wasteland. Wild Arms 3 continues the use of the Search system that was introduced in Wild Arms 2 which basically means that until someone tells you about a location, you won't be able to visit it. Once you learn about a location, you can head to the area mentioned, and use the Square button to send out a radar-like signal that will pinpoint the location of the place you are trying to find.

In addition to the Search system, Wild Arms 3 uses the ASK system, which means that when you are conversing with someone and you see text in green, you can highlight the words, hit the square button, and you will "ASK" for further information regarding that subject. It's a bit gimmicky (especially because the acronym ASK is supposed to stand for "Approach to Selected Keyword" which essentially sounds like someone was making up acronyms for fun), but it works well enough to keep you a bit more engaged in the dialog then you might otherwise be.

Almost all the dungeons in the game require some puzzle solving to move forward. Each character has a set of 'tools' that can be used to assist in solving the puzzles. To help (or hinder) your ability to solve the puzzles, you cant rotate the camera 360º around your characters so you can view the puzzles from every angle. The puzzles make each dungeon a fresh and unique experience so you never get bored while exploring.

The combat is really where this game shines. At first glance, you'll see a fairly standard turn-based combat system. Actions are selected for each party member, and once your selections are complete, each member of your party and the enemies with carry out their actions based on their RFX stat. Through the course of the game, you will obtain Guardians that you will attach to your party member that will give you access to additional abilities. By 'Invoking' the guardian, you will be able to summon the guardian to fight, use the Arcana (magic) associated with that Guardian (so the fire Guardian grants the ability to case fire-based Arcana), and equip Personal Skills. This system allows you to completely customize your characters. The great thing about the customization system is that you can switch around your skills anytime, even in the middle of a battle. So if you've setup your characters to reduce damage against ice-based attacks, and then you find yourself facing a fire-based enemy, just pop up your character's customization menu during the battle and change around your Personal Skills so you'll take less damage from fire. This is, of course, assuming that you've obtained the items that allow you to do this. The great thing about the customization system is it allows you to turn your characters into real powerhouses should if you want to take the time to get the items required to do so. 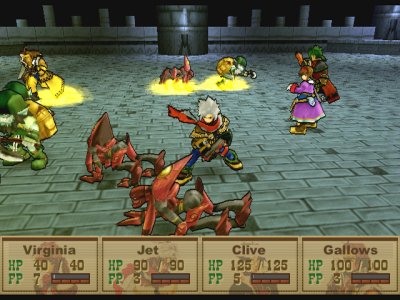 In combat, many of your abilities are determined by your Force Points (FP) gauge (a 0-100 scale). At the outset of each battle your FP gauge is set to the same number as your characters' level. As you take damage or attack, your FP gauge will increase. FP enables you to cast Arcana, increase your base attacks, and increase your defensive abilities. Each Arcana requires a certain amount of FP to use. Lower level Arcana will require less FP while some advanced Arcana require a fully charged gauge. Unlike other games, using Arcana, doesn't deplete your FP. However, there are special attacks (such as summoning a guardian to fight) that will deplete your FP gauge, leaving you vunerable and unable to cast arcana until you are able to charge it up again.

Graphics
Wild Arms 3 uses cel-shading with a 'brushed' graphics filter that was very subtly shifting that gave the game a very unique look. It's hard to describe without seeing it in action but I can say that I really like the art style in the game. Enemies were nicely designed (and it was nice to see higher polygon versions of the monsters from Wild Arms 1 & 2). Spells and summons looks quite good as well. I wouldn't call it the best looking game on the PS2 platform, but the graphics were more than competent. 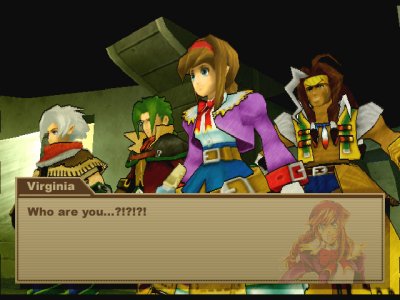 Sound
We're jumping to the PS2, so we should have a load of spoken dialog, right? Wrong. There's nary a spoken word in Wild Arms 3 so be prepared to wade through some text. If you're an experienced RGPer, this really shouldn't be a big deal, but if you are new to the genre and have only experienced the more recent 'talkies' then be forwarned.

Other than that, the sound was great, and completely fit with was I was seeing onscreen. I also have to mention Michiko Naruke once again returns to score Wild Arms 3 and does a fantastic job. Wild Arms 3 has a great soundtrack.

Value
Well over half of my time spend with Wild Arms 3 were with the side-quests. There's a lot to do here. You can try to find all the EX File Keys (there are 15). You can explore the Abyss, a 100-floor dungeon that culminates with the hardest boss battle of the game. There are over a dozen optional bosses you can challenge. Or if you want more puzzles there are 20 millennium puzzles to tackle.

If you do happen to obtain at least 1 EX File Key by the end of the game, you can then unlock the New Game EX mode which will allow you to start a new game and keep your characters levels as they were at end game.

So in addition to replay value, there's tons of side-quests. I sunk at least 90 hours into the game between the game itself and the side-quests (and I got all 15 EX Key Files)

The Bottom Line
If you like JRPGs you owe it to yourself to play this game. If you've never played a JRPG before, this is as good a place to start and anything else.
Posted by DuncanR2N at 12:22 PM