Christmas has come and gone, and the New Year (and a new decade) is upon us. Panzer posted up his 2009 look back already so I figured I better get mine up before it gets too late.

First off, lets get to the games that I beat this year. I always try to spread the love among my consoles but noticeably absent from my list are the Wii, N64, and PS1. I kept planning on playing some titles from those consoles but I never got around to it. For those that say 100% complete, it means that not only did I beat it, but I beat it on the hardest difficulty, got all the collectibles/achievements/trophies, completed the extra missions, or whatever else there was. You get the idea.

This gives me a total of 30 titles beat this year, up from 25 last year. Still not good enough though. I need to step that up.

I'm particularly proud of two of those 100% Completes:

First, Batman: Arkham Asylum, because getting 3 medals on the Shock & Awe (Extreme) challenge map was a pain in the rear. Beating the map at all was a huge challenge, let alone getting the 3 required medals. But I finally did it, and I was pretty happy with that, as it netted me a Platinum Trophy.

Second, Wild Arms 3. I spent a lot of time on this title getting every single thing one can get, all the EX File Keys, beating all the optional bosses, and doing all the sidequests. As a result I probably sunk well over 100 hours into this game during the first part of this year.

My PSN level is now at level 8, up from level 5 from last year. Part of that gain comes from 4 Platinum trophies this year (Prince of Persia, inFamous, Batman: Arkham Asylum, and Uncharted: Drake's Fortune). Trophy totals are sitting at 388 trophies; 4 Platinum, 15 gold, 76 silver, 293 bronze. 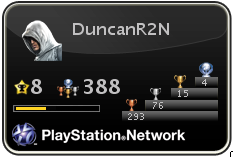 Other items of note: