It's a brand new year, so it's time to lay down some resolutions.
So there it is. Guess I better go play some games: 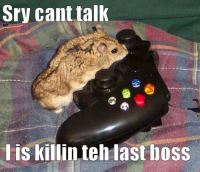