I just got really interested in the Medal of Honor reboot...

There was a time where Medal of Honor reigned king of the 'war' shooters. Then some dudes split off of EA, formed Infinity Ward, and blew Medal of Honor out of the water with a little game call Call of Duty. Medal of Honor has since been relegated to a good but secondary 'war' franchise and hasn't ever been able to recapture the glory days.

Since then however, Call of Duty has lost some steam in the story telling realm. The most recent entry, Call of Duty: Modern Warfare 2, started out good, but then meandered into Michael Bay territory and finally ended up with a Uwe Boll wrap-up.

I was so disappointed with the last entry, there was so many moments that just felt so off and so overly melodramatic that it boggled my mind that the guys that brought the fantastic Call of Duty 2 and Call of Duty 4: Modern Warfare, so missed the boat with the latest entry.

Meanwhile, over in the EA camp, they've been working on a new Medal of Honor game. They are calling it a reboot and to illustrate how reboot-y the series is they gave us this several weeks ago: 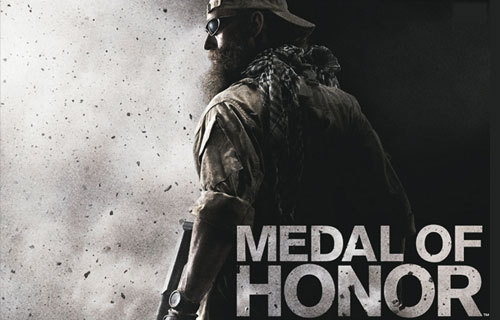 So a guy with a scruffy beard and sunglasses. Well, clearly the Medal of Honor series is moving away from WWII, but it seems like they are just going for the same tack as the Call of Duty: Modern Warfare series.

At least, that's what my assessment has been so far. I've been keeping an eye on it, but not really that interested. However, I read a quote today that really piqued my interest in the game:

“It's not going to be a big propaganda piece where we wave the flag, or anything like that. It's literally about the people that're on the ground.”

So says, EA LA’s Sean Decker, comparing the new Medal of Honor to the movie The Hurt Locker. With regards to the film he states:

“There's been a lot of really good movies – the Gotham Awards just came out and Hurt Locker was the top one. It has nothing to do with the war in Iraq and why it started, or anything else – it's just about the men on the ground, what they go through on a day-to-day basis, and their emotions."

I've not seen The Hurt Locker, so I really can't comment on that, but according to Decker, the game won't even go into why these guys are fighting. It's going to be about the soldiers and that's it.

Medal of Honor just jumped up on my Future Game Watch radar.

Medal Of Honor Is No “Propaganda Piece”
Posted by DuncanR2N at 9:03 PM